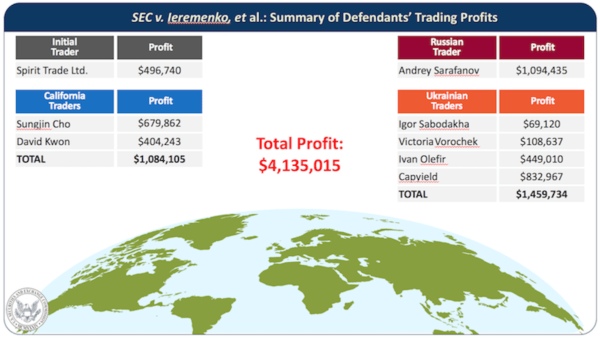 In 2016, the Securities and Exchange Commission (SEC) detected an intrusion of the Commission’s EDGAR test filing system that may have provided the basis for illicit gains. A vulnerability in EDGAR was promptly patched but it highlighted the perils of a financial system that is mostly digital and always at risk.

At the beginning of 2019, the SEC announced charges against the alleged hackers. The SEC said that in total the individuals traded off of at least 157 earnings releases from May to October 2016. The allegation was that the perpetrators generated a minimum of $4.1 million in illegal profits.

Today, the SEC has announced a settlement with two traders that allegedly participated in the hack. The two individuals include David Kwon and Igor Sabodakha. The settlement agreements are subject to court approval.

According to the SEC, Kwon, of California, Sabodakha, of Ukraine, and seven other defendants participated in a scheme to hack into EDGAR. Kwon and Sabodakha allegedly traded on the basis of this hacked information in the narrow window of time between when the files were extracted from EDGAR and when the information was released to the public. Sabodakha also allegedly previously traded based on material nonpublic information obtained through the hack of at least two newswire services.

Kwon and Sabodakha have consented to the entry of final judgments that would permanently enjoin them from violating the antifraud provisions of the securities laws.

Kwon agreed to pay $165,474 in disgorgement, representing the profits from his illegal trades, and $16,254 in prejudgment interest. The settlement reserves the issue of a civil penalty for Kwon for further determination by the court upon a motion of the SEC.

Sabodakha agreed to disgorge $148,804 in profits from his illegal trades, including trades he conducted in the account of his wife, Victoria Vorochek, with prejudgment interest of $20,945. Sabodakha also agreed to pay a civil penalty of $148,804.  The SEC will move to dismiss the charges it had filed against Vorochek.

“As alleged in our complaint, the defendants engaged in an international scheme to obtain and use hacked information to enrich themselves. Today’s result reflects the SEC’s ability to investigate complex schemes conducted both here and abroad and to hold their perpetrators accountable.”

The litigation regarding the case is ongoing.