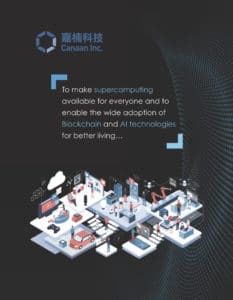 After an application to go public in Hong Kong lapsed last year, Canaan, the second-biggest maker of cryptocurrency mining hardware after Bitmain, has brought its bid to go public to New York.

According to a registration statement submitted to the SEC in Washington, Canaan plans to sell American depositary shares (ADS) Class A hoping to raise up to USD $400 million.

If approved, shares will be sold to the public via the Nasdaq Global Market under the ticker symbol CAN.

A source to Bloomberg predicted the move early this year, and said the company might be seeking to sell shares on a US exchange in order to motivate private investors to collectively contributed $1 billion USD to the company by the end of Q2 2019.

Chinese cryptomining giants Bitmain, Canaan, and Ebang all profited incredibly during the crypto boom of 2017, but have suffered in the subsequent contraction.

Many cryptomining customers of all three companies went out of business or scaled back as the crypto price balloon flattened in early 2018 and stayed mostly flat or low thereafter.

Bitmain and Ebang also proposed to go public in Hong Kong but did not make it.

It is believed that Hong Kong regulators were concerned about the future of cryptomining in general and the companies’ lack of experience in AI and standard data processing.

There is also a big push in crypto now to move away from cryptomining, which is incredibly resource-intensive.

The company also touts the “outstanding performance of its,”self-developed neural-network accelerator, which is a class of microprocessor designed as hardware acceleration for AI applications.”

Challenges include fluctuation of the Bitcoin price, regulation of Bitcoins and Bitcoin mining; “classification of cryptocurrency mining as an eliminated industry by PRC government authority,” and “constant technological changes in the industries we operate in,” among other factors.