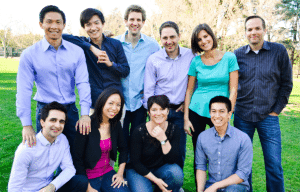 Upstart, started by reformed Googlers, is a crowdfunding site that crowdfunds you with a slice of economic freedom. In their own words,

Upstart aims to help you with the most important part of pursuing your dreams – taking the first step. It may be as simple as applying for an internship, relocating to another city, or spending a few months in a garage working on your idea. Your Upstart backers will provide you with a modest amount of capital, combined with the support and guidance you’ll need. In return, you share a small portion of your income for 10 years. By matching you with the right backers and by providing just a slice of economic freedom – where repayment is based on your future success – we help you get started on the right path.

Whether you’re an engineer, artist, financial wizard, or entrepreneur – we believe the most important startup is you.

Today, April 22nd, just happens to be Upstarts birthday and to share in the celebration Upstart announced some good news on their blog:

So Happy Birthday to the entire team at Upstart. Let’s hope year two is even better.