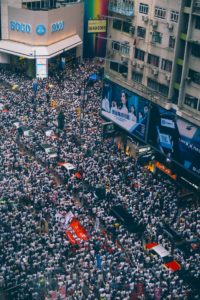 A cryptocurrency ATM company gave out free water and umbrellas to protestors in Hong Kong July 1st, and crypto trading platforms have been, “providing a way to off-ramp from HKD…and advocating for transactional privacy,” as resistance to recent power assertions by China enters its 11th week.

According to Forbes contributor and Ethereum speculator Roger Huang, the water and umbrella project was organized by a company called Genesis Block and was, ” funded by international Bitcoin cash donations.”

Labels on the water bottles state they were provided by “crypto friends,” and invite recipients to donate Bitcoin Cash themselves by scanning a QR-code on the label.

Bitcoin Cash was created as a contentious “hard fork” of the original Bitcoin network. It is unclear from the report why that particular coin was chosen.

One major supporter of Bitcoin Cash was Jihan Wu, co-founder of Bitmain, the world’s largest cryptocurrency mining firm. When China started cracking down on crypto in apparent earnest in 2017, many local crypto projects decamped to Malta and elsewhere. But according to Wikipedia, Bitmain is still headquartered in Beijing.

Huang writes that while, “not a very large amount” of Bitcoin Cash was received following the water-bottle campaign, “this initiative represents a tangible representation of how…in a time of change, cryptocurrency awareness can be increased through tangible, physical efforts to engage with communities on the ground.”

Cryptocurrency advocates lately claimed that a recent rise in the price of Bitcoins likely occurred because Hong Kong citizens -in response to the crackdown- and mainland Chinese -in response to diminishing yuan values- began moving assets offshore.

Maybe so, but Huang writes that Genesis Block has reported a 10% decrease in business at street-level crypto ATMs adjacent to protests, and another crypto ATM company, HK Bitcoin ATM, has also reported, “a general decrease in trading volume that was somewhat correlated to when protests were happening.”

That said, Huang claims that:

“(E)xchange demand on providers such as Tidebit showed premiums for cryptocurrency bought with Hong Kong dollars.”

Huang also believes the, “Genesis Block’s drive to raise awareness about cryptocurrency in Hong Kong…show(s) that when it comes to cryptocurrency and the Hong Kong protests, it isn’t just about the money.”