Authorities responsible for regulating finance, banking and taxation in South Africa have issued a consultation paper stating that regulation of the cryptocurrency/digital token sector should be enacted forthwith and adjusted to accommodate innovation later:

The paper is issued as a follow up to statements made by these authorities in 2014 warning the public that, “no legal protection or recourse was offered to users of, or investors in, crypto assets.”

“The aim of the IFWG is to develop a common understanding among regulators and policymakers of Fintech developments, as well as policy and regulatory implications for the financial sector and economy.”

“The approach to reviewing fintech innovation is a balanced one, considering both its benefits as well as taking cognisance of associated risks.”

Two crypto use cases are briefly analyzed in the consultation paper: crypto trading and the use of cryptocurrencies for payments.

The paper explains that digital tokens/cryptocurrencies can be traded three ways: peer-to-peer (ex. LocalBitcoins), on exchanges or at ATMs.

The paper notes that Bitcoin was originally created as a payment network (and not for speculation) although, “The associated value of crypto assets is still largely tied to fiat currency exchange rates, which attests to the fact that crypto assets have not yet been adopted as a unit of account.”

The consultants point out that using crypto for payments still falls outside a “regulatory framework” in South Africa, meaning payments are made at the “discretion of consumers and willing merchants.”

This is an interesting point. The documentary, “Bitcoin: Beyond the Bubble” advances a case for Bitcoin in regions of Africa where banking and credit availability are light.

Unlike credit card transactions, Bitcoin payments cannot be reversed without the consent of the recipient, a feature that one of the commentators in that film says could help regions overcome low availability of capital due to high local instances of credit card fraud and resulting reticence among creditors to serve certain regions.

But in the absence of regulation, a “discretionary” payment network is “fragmentary” and implies a lack of recourse/consumer protection if and when that system is abused.

“The risk with potentially the widest-ranging implications is the threat to central banks’ historical exclusive right to issue money and control the money supply…(an) ability that has the benefit of ensuring an efficient monetary policy transmission mechanism. The risk posed by crypto assets to the monetary policy transmission mechanism is: should demand for crypto assets increase significantly, demand for fiat currency would decrease. In essence, this would lead to the creation of a parallel – and ultimately fragmented – monetary system.”

The consultants also see a possible risk to financial stability if the market cap of crypto passes the “psyschological” mark of $1 trillion.

Crypto networks could also end up competing with “national payment networks” the consultants say but without the same level of regulation.

Money laundering and criminal use are implied.

Finally, the consultation paper, “presents recommendations for dealing with crypto assets from a South African perspective.”

“Under this approach, innovators are obliged to adapt to the prevailing regulatory environment.”

The second possible approach is to “let things happen,” described by the American Commodity Futures Trading Commission’s (CFTC’s) Giancarlo as the ‘do-not-harm’ approach:

“The do-not-harm approach is highly cognisant of not letting overregulation stifle innovation, and supports finding the optimal balance between innovation, the concomitant risks and the wider safety of the financial system.”

The consultants suggest using the Lansky scoring system of 0-to-5 (zero for “ignoring” and 5 for full or partial ban/integration) for considering how to implement rules governing the sector. 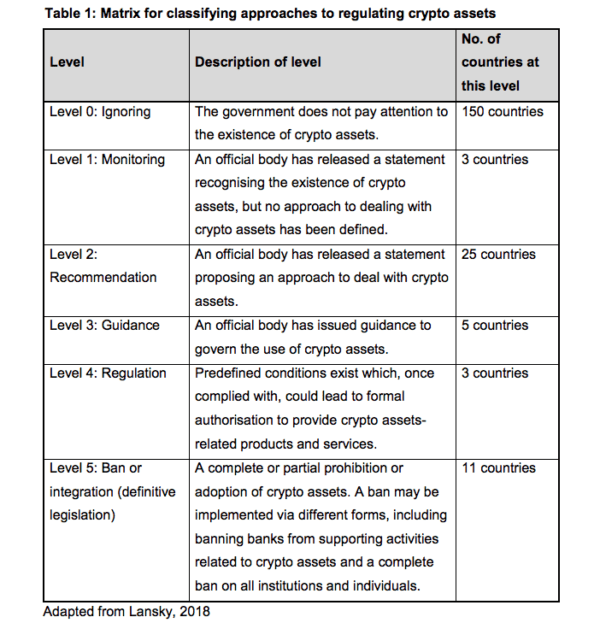 The regulators say they will, “…specify the way forward through a policy instrument such as a guidance note or position paper aimed for [the] first quarter of 2019.”

Stakeholders and members of the public are invited to submit comments by February 15th, 2019, to SARBFINTECH@resbank.co.za:

“Input received will feed into a crypto assets policy paper that will set out the manner in which crypto assets will be managed within the regulatory perimeter in South Africa.”